Software-defined networking and network functions virtualization hold significant progress. The trick is getting there from here. 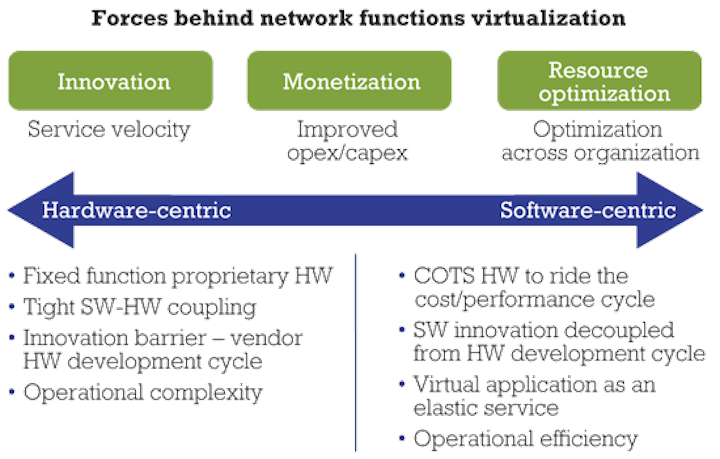 Carriers and content service providers are experiencing a tsunami in traffic levels fueled by the ever-increasing consumer and business demands driven by over-the-top (OTT) applications and the movement of "all things" into the cloud. To support these levels of traffic -- along with the new and expanded data centers being deployed globally to accommodate them -- network infrastructures have to evolve. That means operators must embrace change -- particularly change that improves network optimization, maximizes agility, and increases monetization.

There are multiple financial, operational, and competitive reasons operators must start alleviating the bottlenecks that exist in network infrastructures today. Operational costs are skyrocketing. Complexity is increasing. Revenues are decreasing. In most cases, this "trifecta of trouble" is unfolding because it takes too long to capitalize on new innovations and incorporate them into services and applications that customers want.

Legacy networks' functions typically are built with fixed, vertically integrated, and propriety operating systems, software, and hardware. These layers are "locked in" together and restrict innovation. Lifecycles for hardware are short, but product development cycles are longer than for the other layers. Software, operating systems, and hardware need to be decoupled to spur innovation and enable new revenue generating services to be tested and launched quickly.

Fortunately, with new open standards for software-defined networking (SDN) and network functions virtualization (NFV), "untethering" software from hardware is for the first time a reality. This decoupling enables more elastic network layers that will be key to deploying new applications and virtualized network functions more flexibly and rapidly.

That said, existing investments in network infrastructure have to be protected. Performance must be maintained. Network operators can't conduct a network overhaul overnight. There must be a transformational approach to existing operational and organizational models. Moreover, there's some risk involved.

But there's clearly much greater risk in doing nothing. Traditional operators are conservative in adopting new technologies, and many wonder what benefits SDN- and NFV-enabled platforms bring. Currently, operating expenses (opex) contribute a major part of an operator's cost of delivering services; as such, optimization is in focus. Many are evaluating SDN and NFV, however, with an eye toward minimizing disruptions to their networks and the customers who depend on them.

The transformation of network infrastructures has to include network virtualization, centralized policy-centric application integration, and the simplification of underlying networks. It also must be extended beyond the four walls of the data center -- and down the protocol stack to the optical layer. SDN brings virtualization to the networking infrastructure to reduce operational complexity and escalating costs. While initially developed for use cases within the data center, the true value of SDN will be even more fully realized beyond the data center, as it adds automation and programmability to a multivendor network infrastructure layer in an end-to-end manner.

NFV expedites services innovation and velocity and improves economics through open computing, operating systems, and a new network functions environment (see Figure 1). As virtual-network functions (VNFs) are deployed at various distributed and centralized NFV environments, SDN will play a key role in enabling service paths between VNFs to chain them together.

Looking at the increasing number of recent infrastructure, control, and orchestration announcements, it's clear that the computing, storage, and networks have to be centered on applications. The underlying infrastructure layer -- which must be built on an intelligent platform as the foundational building block-- is where operators can differentiate. By doing so, they can more meaningfully enhance the experience of the application -- and the subscribers -- through better performance, lower latency, increased security, higher availability, increased utilization, simplified operations, and even improved economics.

NFV offers operators the opportunity to move away from the forced-fit legacy approach to add application awareness. Combined with a move to commercial off-the-shelf (COTS) hardware and open operating systems, the innovation cycle of software also is separated from hardware. That fuels much faster rates of innovation and new services.

So, is the next generation network pendulum going to swing all the way from distributed to centralized with all VNFs hosted centrally? Absolutely not. A hybrid network model will prevail -- centralizing what you can and distributing what you must (see Figure 2). There are many VNFs that should move to a cloud model, with others remaining distributed to preserve the application centricity of the underlying network layer without compromising the NFV value propositions.

The optimized NFV platform is a key building block in delivering the network transformation (see Figure 3). It needs to have the following dimensions built in:

The pace of transformation

Network operators will introduce changes gradually. The hybrid model, leveraging SDN and NFV, provides a seamless migration path without jeopardizing performance or the integrity of the network. Operators who realize they must respond to the unprecedented levels of traffic traveling across their data centers -- likely to increase with demands fueled by bandwidth-intensive video applications, for example -- will bring new competitive services to market much faster. That, in turn, will allow them to drive additional revenues.

It can no longer take up to a year or more to deliver new services for application-hungry consumers and businesses. Large content providers, such as Facebook and Amazon, are investing heavily to build their own networks for optimal control and keep pace with rapidly changing business demands and requirements. New SDN- and NFV-enabled networking platforms will have the massive density, space, and power savings required for cloud-based services and applications. Importantly, they will also provide network analytics, programmability, and increasingly granular application awareness.

Resistance is futile. Continuing with the status quo of a proprietary, fixed legacy network is akin to the telecom companies that refused to react when Internet-based communications changed the communications field forever. Those companies are no longer a factor in a very vibrant and active marketplace.

Innovation and open environments make the next generation of networks not only feasible but also a reality for operators seeking to more fully capitalize on their networks while optimizing opex with innovative monetization. Vendors can start by building new intelligent networking platforms as building blocks to enable a network fabric that can be monetized.

Network operators can start by enabling "VNF-as-a-service" as the first step toward monetization. If we just focus on driving out the margins of vendors and carriers, we will also drive out innovation and turn cloud networks into a pure utility. Nobody in the communications innovation ecosystem would benefit from that environment.

JULIUS FRANCIS is director of product management at BTI Systems.