Hawaiki Submarine Cable LP and its technology and deployment contractor, TE SubCom, say that system manufacturing of the transpacific submarine cable's plant has begun and the project remains on track to complete by mid-2018. 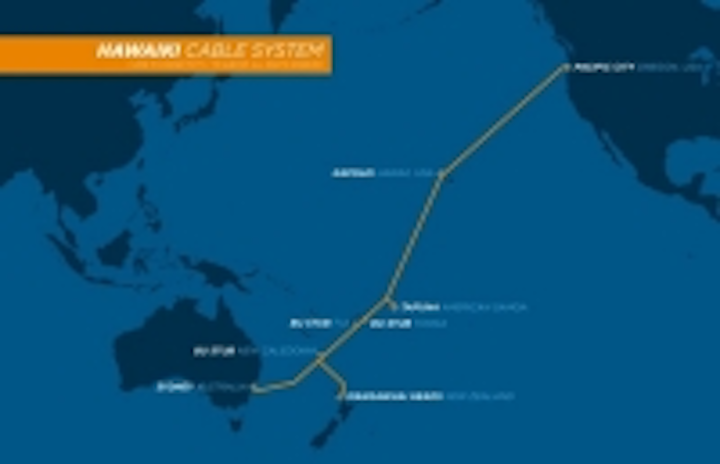 Hawaiki Submarine Cable LP and its technology and deployment contractor, TE SubCom, say that system manufacturing of the transpacific submarine cable's plant has begun and the project remains on track to complete by mid-2018.

Hawaiki will connect Australia and New Zealand to the West Coast of the United States, with spurs offering connections to island nations and Hawaii along the way (see map above). Newly announced branches include links to New Caledonia, Fiji, and Tonga. The infrastructure will run about 14,000 km.

TE Subcom, a TE Connectivity Ltd. company, has manufactured more more than 1,000 km of cable for the submarine network so far at its facility in Newington, NH. The company reports it also has begun building the necessary repeaters.

"We've seen tremendous progress with Hawaiki in the past several months, with each step bringing us closer to a completed, working system," said Galasso, who serves as CEO of Hawaiki Submarine Cable LP. "We remain on time and on budget, and trust that in conjunction with TE SubCom, Hawaiki will be fully lit by mid-2018, bringing competition and diversity to the market, and vital connectivity to the region."