JANUARY 9, 2008 --As carriers transform their networks in an effort to simplify network layers, use fewer technologies, build a more cost-efficient infrastructure, and move to all-packet, a new optical transport layer will emerge, say Infonetics analysts. This new layer will be a fused Ethernet-WDM packet transport with circuit-like capabilities via Ethernet transport tunnels. 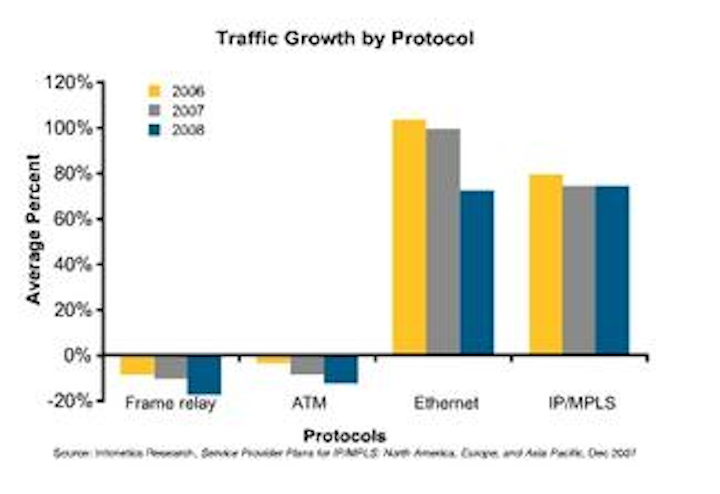 JANUARY 9, 2008 -- In a recent study by Infonetics Research (search for Infonetics Research) to determine the data network evolution plans and router and switch requirements of service providers in North America, Europe, and Asia Pacific, the increasing importance of Ethernet features prominently.

As carriers transform their networks in an effort to simplify network layers, use fewer technologies, build a more cost-efficient infrastructure, and move to all-packet, a new optical transport layer will emerge, say Infonetics analysts. This new layer will be a fused Ethernet-WDM packet transport with circuit-like capabilities via Ethernet transport tunnels, also known as COE or connection oriented Ethernet (search for Connection Oriented Ethernet).

The service layer above the Ethernet-WDM transport will be simplified to IP/MPLS/Ethernet, and carriers will gradually reduce their dependence on SONET and SDH in transport and on ATM in service layers, while increasing their use of Ethernet in the service and transport layers, says the study. This means a growing IP router and carrier Ethernet switch market.

"COE . . . transport tunnel technologies like T-MPLS and PBT are seeing strong adoption given their early stage of development and will be an essential ingredient of the service and optical transport layers, as they allow the displacement of SONET/SDH and enable carrier Ethernet switches to displace some routers," explains Michael Howard, principal analyst at Infonetics Research. "As a result, router and carrier Ethernet switch sales should continue strong as Ethernet and IP/MPLS traffic continues to grow, and at even faster rates than seen in a similar study we conducted last year."

Other highlights from the study include the following:

• Further penetration of broadband, increases in bandwidth usage, and the move to IPTV and triple- and quadruple-play service offerings will drive Ethernet and IP/MPLS traffic growth over the next three to five years.

• Seventy-two percent of the study's respondents will participate in inter-provider quality of service (QoS) in 2008; IP VPNs and VoIP are the most common services that make use of inter-provider QoS.

• Reliability continues to be the #1 criteria respondents use in selecting an IP router and switch manufacturer.

• Cisco, Juniper, and Alcatel-Lucent sweep the field when respondents name the manufacturers of the edge routers they have currently installed.

• Thirty-four percent are incumbents and 66% are competitive operators; 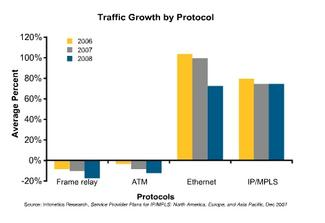