The traditional multiservice provisioning platform (MSPP) was developed primarily as a lower-cost alternative to the legacy add/drop multiplexer (ADM). Over time, system vendors have added basic Ethernet (over SONET/SDH) and WDM technology (even creating a WDM-heavy version in the multiservice transport platform or MSTP). Now, another multiservice platform has emerged, and many people view this device as the next step in the evolution of MSPP/MSTP technology. Like the traditional MSPP, the new device also includes SONET/SDH, Ethernet, and WDM, but it represents a much larger jump in functionality in terms of both Ethernet and WDM than previous generations. 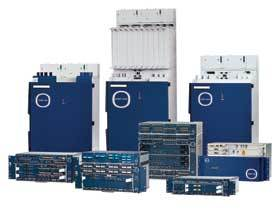 Unlike the traditional MSPP, the PONP is optimised for all-packet transport. But it can support all-legacy transport or any combination of packet and legacy transport, and herein lies its key benefit to service providers.

According to Sam Lisle, market development director at Fujitsu (www.fujitsu.com), the PONP was developed to solve a fundamental problem: “How do you solve a distributed aggregation and transport problem in the metro environment where traffic is moving very aggressively toward packets but still has a strong TDM presence?”

Tom Goodwin, vice president of marketing and communications with Alcatel-Lucent’s (www.alcatel-lucent.com) Optical Networks Division, says his company sees two disparate sets of customers. There are some customers like Telstra that are moving ahead with an all-IP network to support high-bandwidth triple-play services and Web 2.0 applications.

But there are others-many others-who are stuck between the proverbial rock and hard place. They know they need to revise their business model, to change the way they deliver services to end users because “the Googles of the world are killing them,” in Goodwin’s words, but the regulatory environment and their fiduciary duties as service providers are slowing them down.

Moreover, they still derive a sizable chunk of their revenue from legacy TDM services. In fact, Fujitsu’s Lisle notes that the market for DS1 and DS3 services continues to grow. He cites a recent Vertical Systems Group (www.verticalsystems.com) report in which the annual rate of TDM growth is forecast at 5%. “That’s a 5% growth of something that is the size of Mount Everest,” he says.

So while these service providers would like to migrate toward an all-packet network to deliver triple-play and Web 2.0-based services, they need a platform that also will support their bread-and-butter SONET/SDH-based services; the transition to all packet-based services is not going to happen overnight. And this is where the PONP comes into play.

“These newer devices can do all packet or all legacy,” says Alcatel-Lucent’s Goodwin. “They can connect with the WDM network or the WDM ROADM technology network. That’s kind of how they shift away from just a standard MSPP. I know it seems like a subtle difference,” he admits, “but the difference to the service provider is huge because the ability to go all legacy or all packet, from an ingress point of view, means they can place this product today without violating regulatory requirements.” 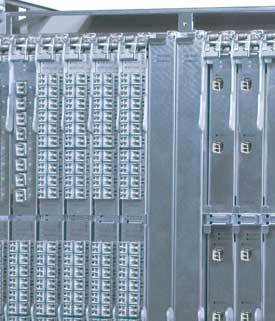 In short, these new PONP devices were architected not only to support SONET/SDH, Ethernet, and WDM capabilities with equal deft in the same platform, but to support “higher concentrations of Ethernet and WDM,” says Helen Xenos, metro Ethernet marketing manager at Nortel (www.nortel.com).

“The network is evolving from layers of data services that may have been in the past-ATM, Frame Relay, also some Ethernet over SONET [and] WDM-to more or less two layers: Carrier Ethernet and ROADM or WDM, but mostly ROADM for its flexibility and better functionality,” explains Emmanuel Nachum, vice president of marketing for ECI Telecom (www.ecitele.com). “The market recognises that the network is collapsing and now it makes sense to integrate these two layers into a single device.”

“Ethernet is obviously very hot and really where folks want to go, so you have to have a really good connection-oriented Ethernet transport story,” adds Lisle. “And then because a lot of these services are becoming more and more high-bandwidth in nature, you need integrated WDM in order to scale the network.”

Nortel’s Xenos agrees. “The role of the typical MSPP in the past has been to aggregate and groom low-order signals onto a 10-gig line signal, but this is no longer efficient for the video traffic that is dominating the metro networks,” she says. “WDM is much more effective at carrying multiple Gigabit Ethernet services or 10-Gigabit Ethernet.”

One could argue that the PONP represents not just the next evolution in MSPP/MSTP technology but also, separately, the next generation in SONET/SDH, WDM, and Ethernet technology. SONET/SDH-based technology evolved from legacy ADM-type devices to next-generation SONET/SDH devices or MSPPs, which first appeared in the 1999/2000 timeframe. And now the MSPP is evolving into the PONP. But the PONP also encompasses an evolution in WDM equipment, from simple point-to-point WDM systems to ROADM systems to PONPs, which include ROADM systems with ADM-on-a-card integration. Simultaneously, Ethernet technology also has evolved from a best-effort service to a connection-oriented, Metro Ethernet Forum (MEF)-compliant transport technology.

When asked where the PONPs play in the network, Lisle notes that “generically, they occupy the same philosophical space in the network [as an MSPP]; it’s just a matter of what functionality is really needed.”

The legacy SONET/SDH-to-MSPP network transition took almost four or five years, recalls Lisle, because service providers were reluctant to swap out the old device for the new. They continued to deploy ADMs where they made sense and an MSPP where it made sense. “We think service providers will follow the same type of approach when deploying packet ONPs as their aggregation infrastructure approach,” he contends. “Because of all the SONET functionality in the packet ONP, it will interwork just fine with a standard, standalone MSPP.”

For example, he envisions a network in which standalone MSPPs, “probably the smaller variety,” are deployed at the edge of the metro network along with some standalone Ethernet devices. “But back when you get toward the aggregation and core parts of the metro, both of those legacy type devices will feed into the packet ONP type system. And you may have some cases where you’ll have a packet ONP on the customer edge as well.”

For his part, ECI’s Nachum reports that his company also anticipates growth in traditional MSPPs in the access network to deliver residential and business services and especially in the wireless backhaul market. “In wireless backhaul, the part of the network that is closer to the tower is still not at the capacity of ROADM or packet ROADM convergence,” he reports. “We still see more Ethernet [and] ATM over SONET/SDH.”

Despite continued demand for traditional MSPPs, PONPs will become increasingly important to service providers that expect a slow migration from today’s TDM-heavy networks to the Ethernet-based all-packet networks of tomorrow. And the vendor community has responded. In an article written for Lightwave Europe’s Q3 edition, Michael Howard, principal analyst and cofounder of Infonetics Research, notes that “nearly all manufacturers have PONPs available now or will have soon.”