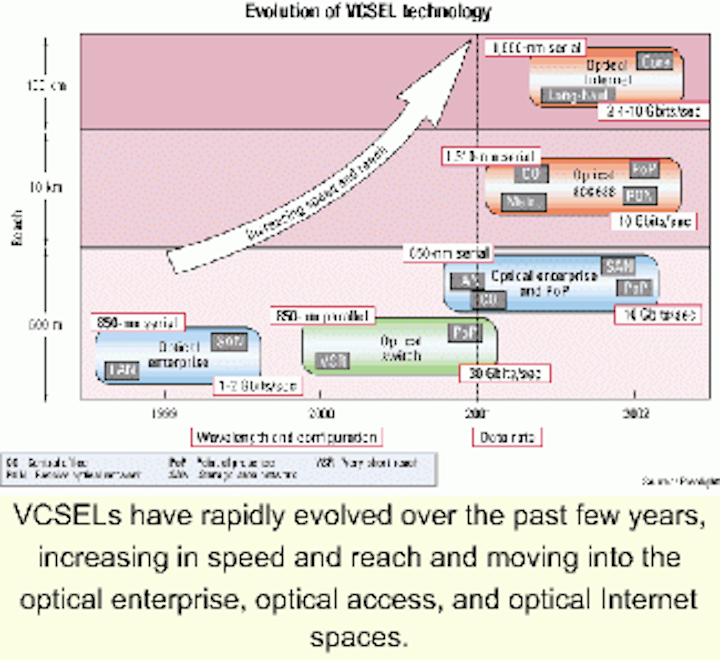 Talk to a few people involved in the research, development, or manufacture of vertical-cavity surface-emitting lasers (VCSELs, pronounced "vick-sels"), and you begin to see a trend: They are all downright giddy about the current applications for VCSELs and their prospects for the future. Picolight (Boulder, CO) CEO Stan Swirhun even goes so far as to declare 2001 the year of the VCSEL.

According to a recent study from market-research firm ElectroniCast Corp. (San Mateo, CA), Swirhun and other manufacturers have reason to be optimistic. "The VCSEL-based transceiver market took hold in 1999 with consumption of $262 million, more than three times that of 1998," asserts the report. "Fueled by the recent success of Gigabit Ethernet and Fibre Channel, this explosive growth will continue, supported by a number of all-new applications, reaching $3.4 billion in 2004 and continuing on to $14.1 billion in 2009."

VCSELs began to penetrate the telecommunications market about two years ago. They have already displaced all other laser technologies in the 850-nm window and many believe they are well on their way to doing the same in the 1,310-nm window. This year in particular has been and will continue to be a milestone for VCSELs, say manufacturers, because they are now emerging as a key enabler of optical switching, optical enterprises, and the optical access space. 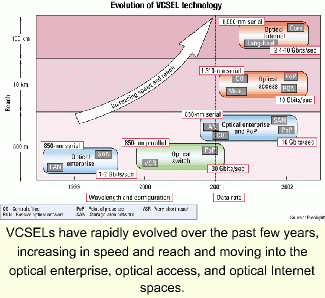 VCSELs have rapidly evolved over the past few years, increasing in speed and reach and moving into the optical enterprise, optical access, and optical Internet spaces.

A VCSEL is a planar device that emits light vertically, or perpendicular to the surface of the substrate on which it is manufactured or "grown." VCSELs are constructed by sandwiching an active region or gain medium between layers and layers of crystals, which act as mirrors. When a current is applied to the active region, light is emitted and bounces off the crystals. Each time light hits the crystals, it is amplified and builds in intensity until it bounces off the top of the laser as collimated monochromatic light.

VCSELs have emerged as the laser of choice for the telecom industry for a number of reasons. They offer significant performance advantages over edge-emitting lasers, which emit light horizontally. VCSELs are smaller than edge-emitters and can therefore increase the power of a given box without changing its size. The 3.5-inch substrate on which the VCSELs are grown is chopped up several thousand times, horizontally and vertically, so that one substrate yields more than 20,000 lasers. Each laser is the size of a speck of pepper.

Another attribute of the VCSEL is its beam profile, which is circular and matches up nicely with the circular fiber, providing a coupling efficiency as high as 80%. By contrast, the beam profile of an edge-emitter is elliptical; typically only 10% of the signal from an edge-emitter ends up in the fiber, requiring coupling optics to refract and reflect light to achieve a better coupling efficiency.

VCSELs are also easier to test than their edge-emitting counterparts. "You can actually go in and test VCSEL devices, probe them, and power them up while they are still on the wafer," explains Charles Duvall, senior director of applications at Bandwidth9 (Fremont, CA). "You can determine which ones are good ones so you do not have to invest any more labor or materials in non-working devices. Your yields go dramatically higher." Edge-emitters, by contrast, must be removed from the wafer and tested on an individual basis, which is costly and produces a lower yield.

Over the past two years, VCSELs have been primarily targeted for enterprise markets and local- and storage-area networks, but thanks in part to a specification passed by the Optical Internetworking Forum (OIF-Fremont, CA) last December, they are now moving into metropolitan- and wide-area networks. The OIF-VSR-01.0 Very Short Reach (VSR) OC-192 Interface Based on Parallel Optics defines an 850-nm VCSEL-based standard for communication using SONET protocols between collocated network equipment in the central office (CO) or points of presence.

"It's the first time a VCSEL-oriented standard has been approved for SONET communications," explains Warner Andrews, vice president of marketing at Picolight. "VCSELs have now got their foot in the door of the CO, and with the emergence of 1,310-nm VCSELs this year, which are coupled into singlemode fiber, we think VCSELs have an excellent opportunity to expand their presence into those switching centers."

The broad acceptance of VCSEL array products in general is and will continue to change the telecommunications landscape, say manufacturers. For example, the folks at PicoLight contend that 10-Gbit/sec VCSEL array products will enable optical switching at terabit increments. Today, 850-nm VCSELs are shipping in volume at 1 Gbit and 2 Gbits, with 10-Gbit VCSELs penetrating the market this year. "That's important, because if you are going to deploy 1-Gbit optics as an aggregation technique between your core routers, you need to do core switching at 10 Gbits in order to have enough bandwidth to really build the optical enterprise at a gigabit," explains Andrews.

On the backplane interconnect, arrays of 850-nm VCSELs are coupled to fiber ribbons, and these currently extend 40 Gbits/sec between racks and shelves of switching and routing equipment. The market may be at 40 Gbits today, but Andrews believes it's only a matter of time before that capacity is increased to hundreds of gigabits.

"Right now, we're doing 1x12 arrays. You could envision 2D arrays, 3D arrays-a variety of VCSELs all coupled together driving a big set of parallel fibers. For shorter-reach distances, that turns out to be a lot cheaper than DWDM," he contends.

Emcore is also working on 40-Gbit/sec arrays, the equivalent of OC-768. "That's just a huge amount of bandwidth," says Gibson. "We have unprecedented demand, though, from people who are trying to do optical switches that need a backplane interconnect, where they have a thousand links within a single box."

Swirhun believes that once the technology hits the mainstream, the demand for VCSEL arrays will be even greater. "One hundred gigabits for 100 meters is a very doable thing," he says. "Even today."

This year, VCSELs will also move into the 1,310-nm window (and some companies are even claiming the 1,500-nm window), where their cost and performance metrics will eventually enable them to displace the edge-emitting lasers currently used here, including the Fabry-Perot and distributed-feedback lasers.

Picolight's Andrews contends that 1,310-nm VCSELs will enable network developers to bridge what he calls the optical chasm-the gap between the optical Internet, where high-bandwidth pipes are available, and the optical enterprise, which this year will reach 10 Gbits/sec. The most logical way to bridge this gap, he explains, is to take enterprise optics and extend their reach outside the building and into the metro network. He expects 1,310-nm VCSELs to extend enterprise optics by 10 km, which is enough to reach 90% of switching centers.

The properties of 1,310-nm VCSELs will make them attractive for other applications as well, including fiber-to-the-home and fiber-to-the-curb, where cost is a critical issue, and micro-electromechanical systems (MEMS)-based optical switches, which require hundreds of collimated inputs and outputs. These applications are still in development, however.

Several manufacturers are now developing long-wavelength VCSELs in the 1,550-nm window, though only three-Princeton Optronics, Bandwidth9, and CoreTek, now part of Nortel (Ontario)-have made official announcements. Devices in this window are tunable, which substantially adds to their complexity and may be why some companies, including key players Honeywell Corp. (Morristown, NJ) and Cielo, are reluctant to divulge the details of their projects.

"Where we stand with long-range VCSEL development is that we have agreements with key customers that are covered under an NDA [non-disclosure agreement]," explains Greg Hart, director of sales and marketing in the VCSEL products division at Honeywell. "In the public domain, all I can say is that indeed Honeywell does intend on bringing long-wavelength VCSELs into the commercial marketplace."

Bandwidth9 is already shipping its 1,550-nm laser, however, and expects to begin production of up to 1,000 pieces per month later this year. Its directly modulated tunable laser is inexpensive, claims Duvall, and therefore a good fit for the cost-sensitive metro market. The laser is tuned MEMS technology to lengthen and shorten the laser cavity, resulting in a 40-nm tuning range across the entire C- and L-bands.

Duvall says the company is also at work on a VCSEL-based tunable filter using the same fabrication techniques as its tunable laser. "VCSELs in general have this dramatic benefit that you can fabricate a wafer with thousands of devices on it on the order of three days, where an edge-emitter typically takes 10 weeks or something on that order," he says. "Our fabrication time is dramatically less, which is also fundamentally why VCSELs have won the 850-nm market."

Manufacturers may wax poetic about the future of VCSELs in the telecom industry, but for now, many of the new applications are still under development in laboratories and university settings. That has not dampened the enthusiasm, however.

"We see the VCSEL as a bit like the transistor," explains Dave Kisker, vice president of VCSEL technology at Cielo Communications Inc. (Broomfield, CO). "In the 1950s, you started seeing transistors appearing in things like radios, but the impact of the transistor wasn't felt in a huge way until it was possible to integrate it in multidevice functions. And that's what we believe the VCSEL is eventually going to lead to-integration with other functions, with electronics, and as a result, we are going to wind up with systems that are based on VCSELs that are going to enable functionality that we are only beginning to think of."