Manufacturing expansion and automation are the solutions in keeping pace with soaring systems demands.

Will capacity expansion shorten the wait for components?

The challenge is simple, really. Demand for optical components has soared, thanks to rising appetites for Internet bandwidth and the rush to build out the networks that underlie the Internet, corporate intranets, and the public-switched telephone network. Supplies of optical components, among them power splitters, pump couplers, filters, pump lasers, packaging, and even test equipment, have lagged behind demand for systems for approximately one year, with most shortages lasting three months or less.

"Demand has far outstripped supply, and the reason is simply that demand for everything in the entire optical layer has grown at an astonishing pace," says Windsor Thomas, business manager for micro-optic components at Corning Photonic Technologies.

As systems vendors scramble to find new sources for components, they also face price increases and delays in product shipment. Yet, no one seems terribly perturbed. The reason is that the optical industry has hit boom times, shortages appear to be short term and intermittent, and the industry will pump up capacity to satisfy pent-up demand.

Kathy Szelag, vice president of marketing at Lucent Technologies' optical-networking group, says there is no real cause for alarm. "The current shortages are transient. If it were a systematic problem, you'd see the same kinds of components being in short supply for a year or more."

The crunch for parts accelerated over a nine-month period through the summer, but is in abatement now. Lucent's optical-networking group experienced the biggest slowdowns from its suppliers last May. "We source from 300 suppliers," explains Szelag. "We did have to slip on some shipments to customers; and that was primarily on the OC-192 product line due to shortages in 10-Gbit lasers." The crunch in high-tech components such as the 10-Gbit lasers, receivers, and fiber grating devices was apparent as early as the fall of 1999. "That's because the OC-192 market blossomed and suddenly hit its peak," notes Szelag. 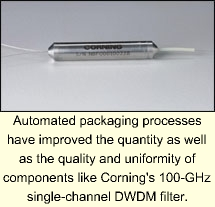 Automated packaging processes have improved the quantity as well as the quality and uniformity of components like Corning's 100-GHz single-channel DWDM filter.

"What's happened in the last six months is that various industries have simultaneously exploded. Industries that you wouldn't think have much in common-PCs and laptops; wireless or cellular handsets-are all soaring. We experienced 100% growth in optical for this year-not just in high-tech optical but anything optical. Those three industries, PCs, wireless, and optical networking, use a lot of common components. For example, power supplies and chips to get power to the units, as well as handheld phones that need these units," explains Szelag. There have also been shortages in circuit packages and basic connectors. "Things to snap the system together or backplanes; those are the items most in demand right now," she adds.

Lucent has been able to catch up on components by adding new sources and ordering additional supplies of parts from companies like JDS Uniphase, Corning, and Agere Networks, all of which have stepped up production.

Agere Networks (formerly Lucent Microelectronics), which is now in a pre-initial public offering quiet period, has announced expansion of its manufacturing facilities in Pennsylvania, California, and Matamoros, Mexico. "We're seeing an increase in customer demand, so we've made a $65-million investment in expanding our optoelectronics capabilities," says Bob Ciminera, vice president of operations at Agere's optoelectronics division. "Our announced call is to increase our product yield by four times; and that will be done through investment in manufacturing facilities, improving our efficiency, and doing more in automation. We are also looking at our own supply line strategy, as well...to ensure supply, quality, and lowest possible cost."

Like Lucent, Alcatel is also reporting revenue growth from optical systems-despite longer lead times than usual for optical components and testing equipment, according to company reports. For example, Alcatel DWDM and optical-crossconnect equipment results for third quarter 2000 showed a "four-fold increase in revenue from such equipment compared to the same quarter of 1999," reports Tim Fiala, a company spokesperson. Although that amounts to an overall growth rate for optics-related business at Alcatel of 40% in a year, the company has issued statements acknowledging the shortage situation, saying it "has put considerable pressure on those that supply our industry. Whilst they have gallantly responded to this growth, inevitably our industry has witnessed increased component lead-times. Clearly, our suppliers face similar issues to ourselves when it comes to increasing their capacity; it doesn't come over night."

Alcatel claims it is ahead of the game by sourcing components through multiple suppliers, including Alcatel Optronics, which has provided new sources for laser and amplifier products as well as a range of passive components. "Alcatel has been willing to commit and contract for these needs," says a company spokesperson. "This has enabled suppliers to invest in confidence to ensure that capacity is available to us in a timely manner."

Alcatel is looking for new suppliers to bolster its existing pipeline for components. The company says it also plans to take steps to improve relationships with suppliers, including, when possible, "easing the component specification based on experience, which pays enormous dividends through yield improvement at the supplier, thus providing greater capacity for Alcatel."

JDS Uniphase is a major supplier of components for vendors such as Ciena, Nortel Networks, Lucent, Cisco Systems, and Alcatel. The company, which resulted from the merger of JDS Fitel and Uniphase in July 1999, continues to grow through a series of acquisitions, including a merger in July 2000 with SDL, a component manufacturer. JDS Uniphase is also expanding in China, and projects that by the new fiscal year it will have five million square feet of manufacturing space.

The component manufacturer is also working aggressively on other manufacturing expansion plans. "We've made a commitment to expand our capacity to four times the current level, and we have a four-pronged approach," says Jeff Wild, vice president of corporate communications for JDS Uniphase. "We're expanding our physical manufacturing space from 1.2 million square feet to 3.6 million square feet in 30 facilities in 11 countries around the world.

"A second prong is to look at how we manufacture," Wild continues. "We're aiming for 'lean manufacturing' and implementing world class manufacturing processes. Another prong is automation. In our world of components, which are often broken down into different kinds, actives and passives, there's a lot of automation possible based on the semiconductor [manufacturing] process. So we're building on the semiconductor industry to improve how we manufacture, including the production and assembly of passive components, which are traditionally more labor-intensive than actives." Automation approaches include splice stations and automated testing, Wild says, which enables "up to 10 times the throughput we had before. Another prong is outsourcing. We've outsourced some splicing for assemblies for amplifiers to companies like Celestica, a large outsourcer for the electronics business."

Charles J. Abbe, president and chief operating officer of JDS Uniphase, says component volume shortfalls thus far have lengthened product delivery times. "We'd like to deliver product in four weeks instead of 12 weeks. From an industry point of view, the demand is like a bow wave pushed out in front of a boat; our goal will be a capacity expansion of four times over 18 months. The only thing that would shift that view would be a switch in our perception of long-term growth in the industry.

"We've seen shortages up and down the supply line," he continues, "with the most severe ones at the component level, particularly in packaging."

Components have been a bigger bottleneck on average than system-level capacity. "We are aware of a lot of recent concerns," Abbe acknowledges. "Many service providers' capital budgets aren't growing, and there has to be money generated to pay for all of this. Within the optical space of DWDM, for example, we're not seeing fundamental shifts in industry growth."

The strategy for component manufacturers will therefore be a greater increase in manufacturing efficiency as opposed to wide expansions of the labor pool. "Our head-count growth will be substantially less than our output growth," says Abbe. "I'd say as a simplification, for example, that packaging capacity is in shorter supply than either the active or passive thin-film devices that form the heart of the components we manufacture. Packaging requires more people and floor space and is manufacturing-intensive. So we're looking to continue significant advances in automation and product design principals, and quickly incorporate several generations of product and process improvements that will greatly increase the amount of output."

"We've radically changed the way we manufacture components today," ex plains Thomas. "It's changed from a highly manual, labor-intensive process, almost a craft trade, with highly specialized technicians sitting at benches, to the implementation of mass-production automation that radically improves the quantity of devices as well as the quality and uniformity."

Corning believes it has very rapidly built up capacity for DWDM. "We will expand capacity by an order of magnitude during the next three to six months," says Thomas.

Ciena has executed a components strategy based on self-strengthening and production of key component product lines. "The shortages thus far have been in power splitters, pump couplers-components for erbium amplifiers, filters, and lasers," says Jeff Livas, chief technical officer for the transport division. "The stuff we make ourselves, we don't have a supply problem with, [including] such key components as a fiber Bragg grating used for making filters."

Ciena has coped with some shortages in the components it uses to make transmitters and receivers for amplifiers. "I don't think we've missed a delivery to a customer because of it," says Livas, "although it tends to drive the cost up. You need to have all the parts together to build the whole thing, and it causes us to scramble a whole lot more."

Livas believes the Internet explosion will force both component and systems manufacturers to change their paradigms for production flow. "Growth has been explosive; Internet usage has been doubling every four months for the last two years; and the amount of bandwidth we have now won't even hold up two years from now," he says. "I'd say the issue is automation, particularly of packaging-both being able to reconfigure your manufacturing line rapidly for changes in volume and design. If you think of manufacturing as a big pipeline, you have to change flow rate through the pipeline and the direction. That's something the classical manufacturing line is not set up to do. Automation will help that, but the component shortage is a real thing. If you make a small miscalculation about what you think your supply will be; it just magnifies very rapidly. It's a question of not knowing what the next [hot] component will be. Demand can grow overnight-it's a byproduct of a whole industry that is very fast paced, where it takes a new product only nine to 15 months to roll out."

Arielle Emmett is the chief editor of the Wireless Data Forum and contributing editor to The Scientist. She runs her own editor-al services business in Wallingford, PA.