Intellectual property slowdown? Not according to a 2001 patent survey 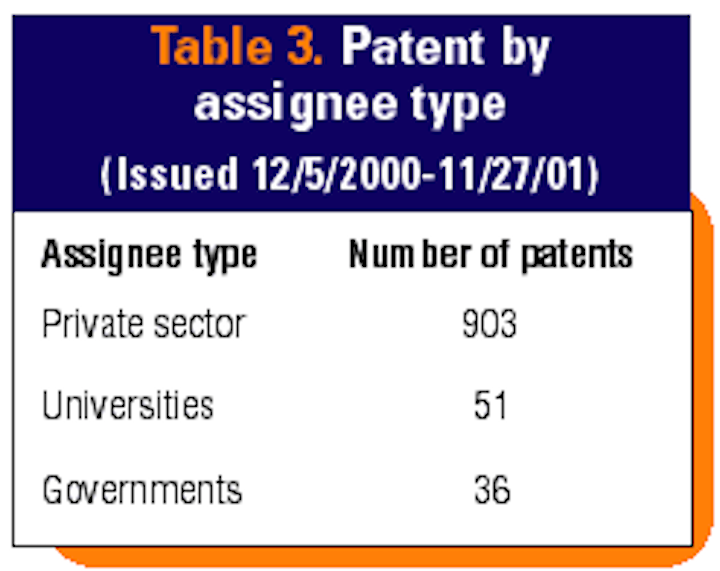 Cost reduction in optoelectronics is a major goal of industry patents. The motivation behind the filing of many patents in recent years was of course an expectation that fiber networks would spread. Unfortunately, the industry's recession is sure to delay when some patents' intellectual force is embodied in real products.

The approximately 990 patents surveyed here were issued between Dec. 5, 2000 and Nov. 27, 2001. These patents contain the innovations of talented inventors and research staffs, many of whom did their work well before the recession in the fiber business and its related industries.

A search for "fiber optics" in the United States Patent and Trademark Office's (USPTO) online database yielded more than 3,000 patents in that nearly one-year 12/5/2000-11/27/01 time period. A focus on patent class definitions such as "optical waveguides," "semiconductor manufacturing," and "optics: systems" also yielded a large number of patents, because the USPTO often assigns a single patent to several classifications.

Table 1 is a cumulative frequency distribution by patent class for the survey's patent population. In a search for "optoelectronics," 40% were assigned to four classes—"optical waveguides," "semiconductor manufacturing," "optics: systems," and "active solid-state devices"—indicating that "optoelectronics" is a reasonable way to discover patents encompassing core notions of "fiber electronics." The cumulative percentage jumps to 50% when the next three classes—"coherent light," "radiant energy," and "coating processes"—are considered. Of the 990 patents surveyed, one-half fell into seven classes. The remaining half fell into another 140 classes. The "total" of 1,489 patents in Table 1 is larger than the 990 patents surveyed, because a single patent is assigned to more than one class; a patent may be classified as a "novel invention" for both "active solid-state devices" and "coherent light."

"Days to approval" is the number of days elapsed between the patent's application date and the issue date. For the entire group, the average number of days elapsed exceeds 860 days—about 2.4 years—with a range of about 600 days to well over 1,000 days. The range is similar to that found in a survey of optoelectronics patents issued between December 1998 and December 2000 (See Lightwave, March 2001, p. 316).

Several keywords were searched in the patents. For example, "laser" appeared 20,634 times in 616 patents and "Lan" 16,040 times in 874 patents. The analysis shows that the top issues continue to be alignment, coupling, heating, and cooling. The terms "fiber" and "fiber optic" appear in about one-half of the patents, but "VCSELs" (vertical-cavity surface-emitting lasers) appears in only 20%. Because patents offer a basis for responding to frequent criticism that fiber is still too costly compared to copper networks, a search for patents related to technologies like VCSELs offer a way to research innovations related to cost issues. There are more references to singlemode than multimode fiber, and many references to "upstream" and "downstream" which imply that bidirectional communication is a significant consideration in some patents. There is a remarkably low frequency of telecommunications terms, such as "central office," "PCM" (pulse-code modulation), "AIN" (advanced intelligent network), "remote terminal," "cellular," and "wireless."

References to "PON" (passive optical network) and "passive optical" appear in only 13 patents. The disparity between the "VCSEL" and "PON" frequencies is consistent with another patent study, where 615 VCSEL patents and 783 PON patents were issued from 1996 through 2001. Of those nearly 1,400 patents, only 18 referenced both terms. Thus, VCSELs seem to hold little importance in a PON-based fiber-to-the-home architecture. 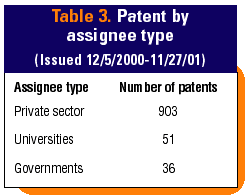 Table 3 summarizes the distribution of patents by three categories—universities, governments, and private sector—with the latter category accounting for 90% of all patents.

The classifications are not necessarily exclusive. Several patents granted to the University of California were funded in part by the U.S. government and include a "Government Rights Notice," which states that the "government has certain rights to this invention." Regarding the private sector, patent 6243508, "Electro-opto-mechanical assembly for coupling a light source or receiver to an optical waveguide," is unusual, because it implies that there must be certain military applications. The patent, granted to Picolight, states, "The government may have certain rights...this invention is made with government support...awarded by the Ballistic Missile Defense Organization."

The unexpected association of missile defense and a patent highlights a forgotten aspect of the patent system: Even though a patent is supposed to "teach," specific technical knowledge can remain undisclosed, forcing imitators to go through their own costly and lengthy trial-and-error procedures.

Unfortunately, all the innovation disclosed in these patents cannot be described here, but what follows is a tiny sampling of the 990 patents, some related to VSCEL technology, an important subset of optoelectronics. Notably, several companies that were issued patents have since abandoned the markets where the patented technology is viable due to the tough economic climate.

Xerox's patent 6185241, "Metal spatial filter to enhance model reflectivity in a vertical-cavity surface-emitting laser," demonstrates that the company was positioning itself in the long-wave VCSEL market, "For many of these applications, a singlemode output is required from the VCSEL...which have poor spatial mode discrimination and non-uniform current injection...[T]he challenge in the current state of VCSEL technology is the achievement of higher levels of output power with singlemode behavior...to enhance the reflectivity for the fundamental mode within the laser aperture." The patent was filed in late 1998, before the company's stock price per share dropped from $25 to $8, which led to a sell-off of certain operating units and abandonment of many projects. Thus, Xerox may never be a force in long-wave VCSELs.

Lucent's patent 6222206, "Wafer having top and bottom emitting vertical-cavity lasers," is an example of "making the most" of short-wave VCSELs: "It would be particularly useful to integrate 850-nm VCSELs since that wavelength forms a standard for local-area fiber-optic networks (the other standard wavelength is 1300 nm, where no manufactured VCSEL technology yet exists)...[T]he VCSEL chips cannot be tested until they have...been mounted, destroy[ing]...the major advantages of VCSELs over edge-emitting lasers...[W]hat is desired is a technique to test VCSEL devices while they are still part of the wafer." The patent was filed before the company's stock price per share fell from $80 to $3. It is anyone's guess whether the restructured Lucent will build on its accumulated intellectual capital in optics or abandon it.

Canon's patent 6222868, "Surface-type optical device, fabrication method, and display device," was motivated in part by an expectation that the build-out of fiber networks would continue: "VCSELs will ultimately dominate the data-networking market, replacing copper as the preferred means of communications for local-area networking as data rates reach and exceed 1 Gbit/sec."

The focus of IBM's patent 6302596 is small-form-factor connectors: "Conventional duplex fiber-optic connectors...have an outer diameter of 2.5 mm, a need exists...[to] mate connectors with a small 1.25-mm diameter....Smaller connectors with fewer precision parts could dramatically reduce manufacturing costs [for]...the optical subassembly (OSA), which carries out the conversion of electrical-to-optical signals...[and for the receiver optical subassembly, ROSA, which converts] optical [signals] to electrical...less area in the [subassemblies] is occupied, which permits...more interconnects." IBM, which has not suffered the disastrous valuation declines of other companies, recently sold its photonics division.

The anthrax attack against the American public makes Aircuity's patent 6252689, "Networked photonic signal distribution system," especially timely, because it invents a system for sensing dangerous airborne pollutants and gases, which are detected by their impact on photosensors. Aircuity proposes a fiber switch and multiplexing method to reduce the costs of these systems and extend their reach. Current systems using TDM and WDM monitor all sensor locations almost simultaneously, essentially limiting the number of conditions being sensed to the number of wavelengths or time slices on the network.

Aircuity employs a "selective approach where locations are sensed either sequentially in a programmed pattern or are selected in real time" and where the optical switches route all the optical power of the source to the sensed location, minimizing optical power loss. Photonic public-health systems like Aircuity's promise to offer an incentive for rewiring a building with fiber, at least for health concerns.

Stephen N. Brown writes on public policy in telecommunications and is Lightwave's monthly "Regulation & Policy" columnist. He can be reached at 615-399-1239 or policywork@aol.com.