This week’s HSN Plugfest drew a greater number of companies than the previous iteration, including some who joined the Ethernet Alliance just so that they could participate. 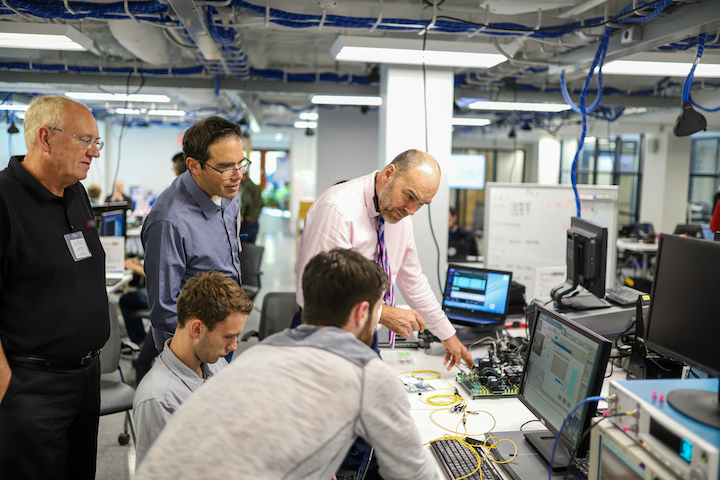 The Ethernet Alliance is wrapping up yet another High Speed Networking (HSN) Plugfest this week at the University of New Hampshire InterOperability Laboratory (UNH-IOL) in Durham, NH. The fourth such event to provide participants with the ability to test the interoperability of their products for applications from 25 Gigabit Ethernet to 400 Gigabit Ethernet (GbE), this week’s HSN Plugfest drew a greater number of companies than the previous iteration, including some who joined the Ethernet Alliance just so that they could participate, according to David Chalupsky, plugfest chair and Ethernet Alliance board of directors member, as well as network product architect at Intel Corp.

“The rising number of new companies participating in our HSN Plugfest series illustrates just how far these rapidly maturing Ethernet technologies are spreading. The drive to deliver more products to market faster is fueling a surge in participation from companies seeking to take part in our plugfests,” commented Greg McSorley, president, Ethernet Alliance, and technical business development manager, Amphenol Corp., via an Ethernet Alliance press release about the event. “Plugfests are a cost-effective avenue for companies to securely test against an array of costly equipment – particularly pre-release products – that they may not have otherwise had access to. It is a perfect representation of how the Ethernet Alliance is working to foster seamless, end-to-end interoperability across the Ethernet landscape while delivering added value for our members.”

The plugfests typically draw participation from companies who bring either pre- or post-commercialized products such as network interface cards (NICs); switches, field-programmable gate arrays (FPGAs), protocol analyzers, interconnects such as optical transceivers and passive and active optical and copper cabling, and test equipment. With this week’s event ongoing, it’s too early to determine how well the participants are doing or whether common problems have been uncovered. The previous plugfest, held at the end of this past April, saw frame error rate (FER) tests produce a 100% pass rate and, overall, functional interoperability tests achieved an aggregated 97.5% pass rate (see “Latest Ethernet Alliance High-Speed Networking Plugfest has 97% pass rate”).

Meanwhile, the Ethernet Alliance has already planned for the fifth plugfest at UNH-IOL, which will take place the week of April 20, 2020. “We have established a 6-month cadence, and I believe that members are finding benefit in that approach,” wrote Chalupsky. “A specific focus may appear closer to the event. For example, in 2020 we expect to see IEEE P802.3ck (100Gb/s electrical signaling) specifications start to mature, and early components capable of 100 Gb/s signaling ready to test. We’ll let the membership make suggestions throughout the year via our Higher Speed Networking subcommittee, and in the end it’s the group that signs the NDA to join the event [that] will drive the specifics.”