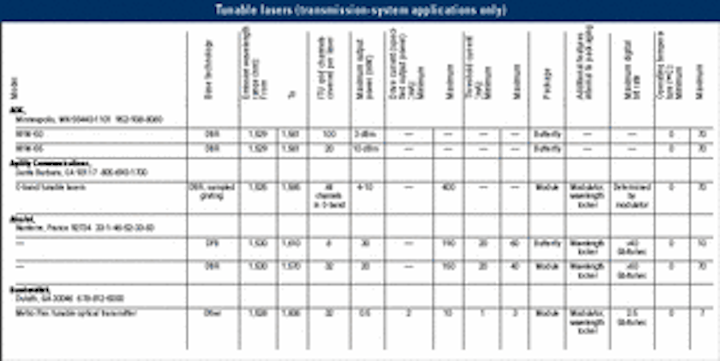 Unlike their benchtop namesakes, tunable lasers for in-system applications are currently not widely deployed. They have not been perfected. In fact, the market is nothing short of chaotic with incumbents and startups alike vying to find the perfect combination of tunability and output power. Yet, while tunable lasers may be in their infancy, they represent one of the most widely discussed, debated, and anticipated technologies in optical communications.

Tunable lasers transmit data over a range of wavelengths, unlike their fixed-wavelength predecessors that emit light at only one wavelength. Today's DWDM systems require a separate fixed-wavelength laser source for each wavelength, so a 40-wavelength transmission system features 40 separate lasers per fiber, each laser tuned to a unique frequency. If one tunable laser could replace an array of fixed-wavelength lasers, the resultant system would be less expensive and more efficient. Because of these devices' potential importance to the future of all-optical networks, the market for tunable lasers is expected to be robust. The Yankee Group (Boston) predicts the market will jump from $50 million in 2001 to $2.32 billion by 2005.

However, some analysts believe that tunable lasers will not see volume deployments for another two to three years because carriers are concerned about the long-term reliability of the devices. While some carriers may be hesitant, others recognize that they will need to deploy such lasers to remain competitive. According to Bob Collet, chief technology officer of nationwide broadband networks provider Velocita Corp. (Reston, VA), whose network extends 18,500 mi through more than 175 metropolitan areas in the United States, the installation of tunable lasers is a high priority. They are "a key design criteria in everything we're doing in our network," he says, and he envisions using them for a lot more than simply conserving inventory.

Today, tunable lasers are used primarily in performance monitoring equipment and as temporary replacements for failed fixed lasers. For the next few years, they will continue to be used as spares, eradicating the need for a separate backup laser for every channel or port in the system, which would result in huge cost savings to carriers. However, once they reach performance parity with fixed lasers, they will also be used for such functions as inventory management and sparing, wavelength routing and conversion, and switching.

The widespread deployment of tunable lasers depends on their ability to achieve the same performance parameters as their fixed-wavelength counterparts. Fixed lasers achieve high output power, on the order of 10-30 mW, but because they can only emit light at one wavelength, they sacrifice tunability for power. To be network savvy, a tunable laser must tune at least across the entire C-band and provide 10 mW of output power if they are to perform in core-network applications.

There are four basic tunable-laser architectures: distributed-feedback lasers (DFBs), distributed Bragg reflector lasers (DBRs), vertical-cavity surface-emitting lasers (VCSELs), and external-cavity lasers (ECLs, which may use elements of one of the other three approaches). While none of these architectures has emerged as the clear favorite, recent trends in the market suggest that there won't be just one widely deployed technology. "One of the interesting things that we are finding in the whole tunable space right now," explains Jack Weise, vice president of marketing at Bandwidth9 (Duluth, GA), "is that the different technologies are really ideally suited for different market segments."

All of the lasers in the long-haul market today are either DFB or DBR lasers-the so-called edge-emitters, because they emit light horizontally to the surface of the substrate. They use an internal grating to change the wavelength and employ temperature as the tuning mechanism. The temperature of the laser chip is changed, either through drive-current changes or a temperature-controlled heat-sink, which changes the refractive index of the active material, thus changing the wavelength.

Though a mature and well-developed process, DFB lasers suffer from limited tuning range. Since one DFB laser won't provide wide tunability, an array of four or eight DFBs, each slightly tunable, can be used to cover a wide range of wavelengths. As a result, DFBs tend to be slightly larger than other tunable lasers.

DBRs employ a variation of the DFB technology; while the active and passive regions of the DFB are combined, in the DBR they are separate. A current change is applied to the passive region, which changes the refractive index and the frequency tune of the laser. DBRs have a wide tuning range and feature fast switching speeds, making them ideally suited for long-haul applications.

"In my mind, they are the best technology right now," says Lisa Huff, senior analyst in optical components at market-research firm CIR Inc. (Charlottesville, VA), "although they've had some stability issues where equipment manufacturers are not deploying them yet." DBRs have several disadvantages, however. They also can be a little larger than other devices, and they sometimes suffer from wavelength instability.

VCSELs emit light vertically or perpendicular to the surface of the substrate. They are constructed by sandwiching an active region between layers of crystals that function as mirrors. A current is applied to the active region, emitting light that bounces off the crystals. The light builds in intensity until it bounces off the top of the laser as collimated monochromatic light.

"The tunable VCSEL is specifically well-suited to address the needs of the metro and metro-access markets, where they don't have the DFB legacy standards that the network architects are designing around," says Weise, whose company uses VCSELs in its device. The metro space does not have the same traffic patterns as the long-haul, he says, where traffic needs to be aggregated and moved from point to point in large pipes; it is more dynamic, fluid, and service-provider- and traffic-independent.

"What we're finding is that in the metro space, tunable lasers play a whole new dimension in adding capabilities to those networks for the service providers," explains Weise. "There's a real difference in how the tunability will be used. In the long-haul market, it's for sparing and inventory management, and in the metro and metro-access, it's for remote provisioning and dynamic reconfiguration of the networks."

While he admits that, in theory, all tunable lasers could play in the metro space, Weise is quick to point out that the manufacturing process of VCSELs make them more attractive than other technologies. VCSELs can be tested on the wafer level, so manufacturers do not have to dice or package devices that fail performance tests, which increases overall yields and results in a lower-cost device. DFBs and DBRs, by contrast, must be removed from the wafer and tested on an individual basis, which is costly and produces lower yields.

The ECL differs from approaches that use temperature or electronics to change the wavelength in that its wavelength is altered mechanically by adjusting the laser cavity. That opens the door to the use of a variety of gain media. "The actual semiconductor is essentially just the same as a CD laser, which is very cheap to manufacture," explains Tim Day, chief technology officer of New Focus (San Jose), in describing his company's ECL. "And the wavelength selection is off-chip as opposed to on-chip."

Because the wavelength selection of an ECL is off-chip, the packaging is slightly more complex. "The added complexity on an ECL is that you go from the diode waveguide to the wavelength-selective filter and back to the diode waveguide," says Day. "It's a little more complex, but it's very doable. Actually, it's very similar to what's done in the disk drive and storage industries."

Wavelength flexibility could prove to be a key advantage of the ECL, however. "Carriers and customers have talked to us about the ability to go into the L-band or the C-plus-L-band if a trend emerges," says Day. "I'm not saying one exists, but there are certainly lots of requests. If a trend emerges for tunable L-band and tunable C-and-L, the other three technologies will be hard-pressed to address that trend, whereas ECLs will be well suited to do so," he adds.

According to CIR, the future of tunable lasers will include "a transition of vendor focus from component-level products to subsystems." While tunable lasers will initially be sold as components for sparing, eventually they will be sold as subsystems or tunable transmitters. No one knows better how to control the lasers than the laser manufacturers themselves, say CIR analysts, and equipment manufacturers would be crazy not to take advantage of this expertise.

There is a potential hurdle, however. "If component suppliers have different tunable transmitters, equipment manufacturers would have to accommodate at least two different designs in order to have a second source," says the report. DBR manufacturers Agility Communications (Santa Barbara, CA) and ADC (Minneapolis) have come up with a solution, a multisource agreement that "will enable the market more than anything else," says Huff. 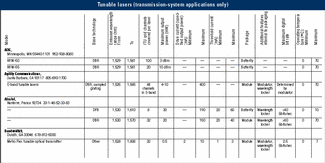 Agility and ADC have agreed to a standardized 40-pin package and created a common software interface so that customers, whether they are ADC customers or Agility customers, can plug and play. ADC and Agility have taken their multisource agreement to the Optical Internetworking Forum (OIF-Fremont, CA) to further emphasize that theirs is an open standard and to invite other manufacturers to join. 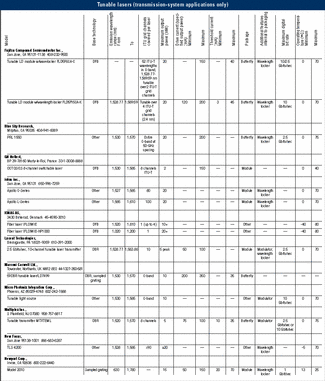 "We're heavy believers in promoting the category of tunable lasers," admits Arlon Martin, vice president of marketing at Agility. As more tunable-laser manufacturers finalize their package design and begin sampling to customers, they will most likely follow suit. 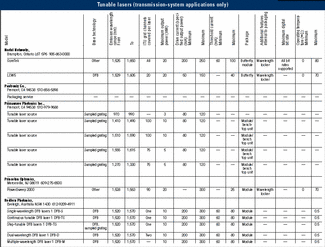 Though the tunable-laser market is still in its infancy, many in the industry predict they will pave the way for a purely all-optical network. According to the Yankee Group, tunable lasers will start appearing in live networks by the end of the year and will reach price parity with fixed-wavelength lasers by 2003.