Add Juniper Networks (NYSE:JNPR) to the list of systems vendors getting into the pluggable optical transceiver space (alongside Ciena and Infinera). The switch and router vendor has announced initial plans to market 100G QSFP28 and 400G QSFP-DD devices leveraging the silicon photonics expertise it brought in-house via its 2016 acquisition of Aurrion. 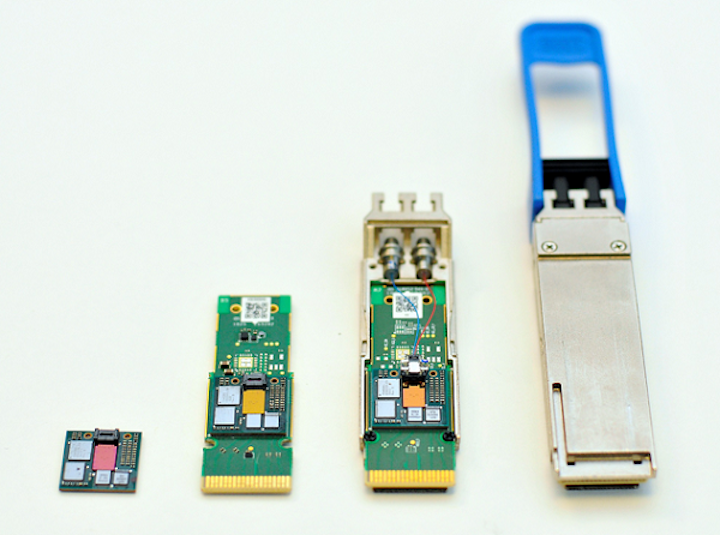 Add Juniper Networks (NYSE:JNPR) to the list of systems vendors getting into the pluggable optical transceiver space (alongside Ciena and Infinera). The switch and router vendor has announced initial plans to market 100G QSFP28 and 400G QSFP-DD devices leveraging the silicon photonics expertise it brought in-house via its 2016 acquisition of Aurrion.

The company is not yet discussing timeframes or production strategies, according to Juniper Networks Senior Director of Product Marketing Donyel Jones-Williams. However, unlike Cisco’s CPAK module from a few years ago, Juniper Networks’ optical transceivers will be based on MSA standard form factors and therefore could be used in switches and routers other than Juniper Networks’, Jones-Williams told Lightwave. The company demonstrated both 100G (QSFP28 LR4) and 400G optical transceivers at its booth at OFC 2019 in San Diego earlier this month. A 2x100G optical module is also expected to be made available.

While optical transceivers based on silicon photonics are plentiful, Juniper Networks believes its approach provides significant differentiation. The design strategy enables integration of photonic elements, including lasers and detectors, into the silicon process flow on the silicon wafer. The chip assembly design includes an optical loopback switch that connects the transmitter to the receiver. The switch enables full circuit testing during the manufacturing process, thus increasing the company’s ability to identify known good die. (The design wrinkle also will enable the performance of optical transceiver diagnostics in the field, Jones-Williams pointed out.)

As illustrated in the photo above, the silicon photonics dies can then be flip-chip-attached alongside ASICs and other electronics on the same ball grid array substrate to create a transceiver. The resulting package can then be combined with DC-DC voltage converters on a PCB, Juniper Networks stated in a blog that describes the approach. A snap-on remateable connector enables fiber connection. Overall, the approach enables power and related savings – 20% over traditional approaches, Jones-Williams estimated.

In terms of the future, Jones-Williams was cagey regarding Juniper Networks’ interest in 400ZR modules, noting only that there’s nothing in the design approach that would limit the company’s ability to create long-reach devices. The vendor is interested in co-packaging photonics and switch silicon and sees its silicon photonics technology as well-positioned to create the reliable photonic arrays such an application would require. The possibility of pursuing onboard optics as in interim step is currently under evaluation, Jones-Williams said.