The Ethernet Alliance held its second Higher Speed Networking Plugfest of 2018 at the University of New Hampshire Interoperability Lab (UNH-IOL) in Durham, NH this month. The event gave technology developers working on Ethernet technology for applications ranging from 25 Gigabit Ethernet to 400 Gigabit Ethernet a chance to see how well their offerings met Ethernet specs and played well with others. 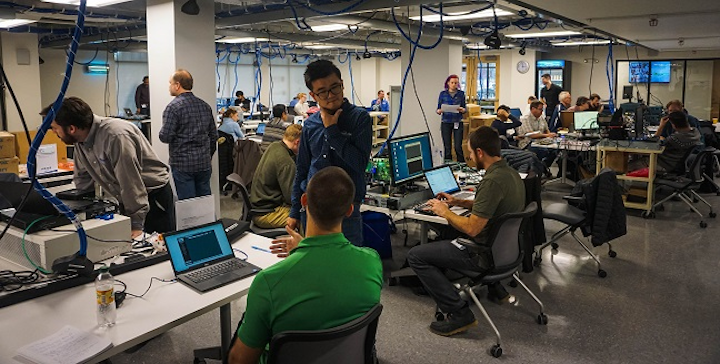 The Ethernet Alliance held its second Higher Speed Networking Plugfest of 2018 at the University of New Hampshire Interoperability Lab (UNH-IOL) in Durham, NH this month. The event gave technology developers working on Ethernet technology for applications ranging from 25 Gigabit Ethernet to 400 Gigabit Ethernet a chance to see how well their offerings met Ethernet specs and played well with others.

The event, which ran the week of December 3, followed a similar interoperability exercise in August (see “Ethernet Alliance plans Higher Speed Ethernet Plugfest”). In an interview conducted at UNH-IOL in the midst of the event, David Chalupsky, hardware architect within the LAN Access Division of Intel and chair of the Higher Speed Networking Subcommittee of the Ethernet Alliance (he’s also on the organization's board), said the fact that this second plugfest occurred so quickly after the first indicates the interest in higher-speed Ethernet product design – as well as the fact that more companies involved in the space now have products ready for such exercises. More than 20 companies participated in the plugfest, making this among the largest, if not the largest, plugfest the Ethernet Alliance has organized. The plugfest would see approximately 1000 unique device pairings, Chalupsky’s estimated at the time. Products involved included network interface cards, optical transceivers, copper-based transmission elements, and test equipment.

Chalupsky noted that when vendors are rushing to bring product to market, it’s not uncommon for early instances to fall short on full standards compliance. The August event revealed that auto-negotiation was a frequent shortcoming among the products involved, for example, and so he was looking for progress in that area this time around. He also said that, since MSA specifications tend to be more open to interpretation than IEEE standards, the 100G Lambda MSA members would benefit from uncovering any issues that may arise as they interoperate with their MSA compatriots and others more focused on the IEEE standards.

UNH-IOL is tasked with compiling the results of the plugfest, and the Ethernet Alliance is likely to offer information on what happened early next year. Chalupsky says that the Alliance organizes plugfests at the behest of its members. While he would not predict when or if a similar event might be scheduled next year, he noted that companies have already expressed interest in a reprise, including some not yet ready for the most recent one.