Test and measurement vendor Teledyne LeCroy has introduced the LabMaster 10-100Zi, a 100-GHz oscilloscope for development of advanced next-generation communication systems. With this introduction, Teledyne LeCroy says it is aggressively pushing real-time bandwidth and sample rate boundaries to achieve 100 GHz and 240 GS/s. 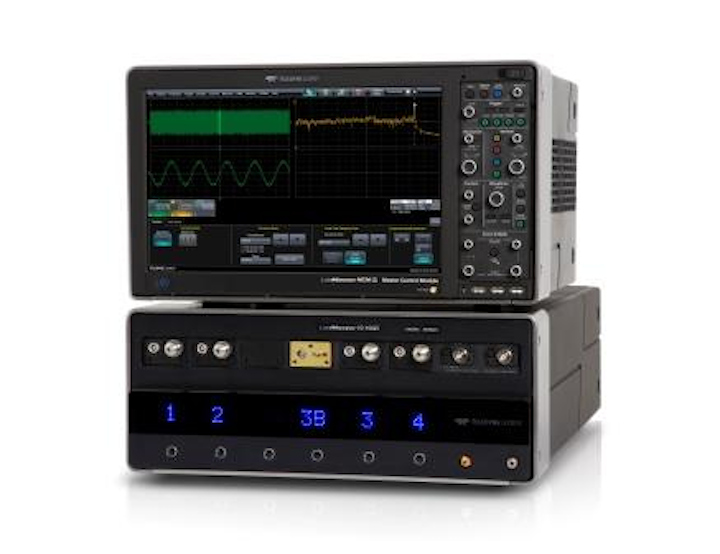 Test and measurement vendor Teledyne LeCroy has introduced the LabMaster 10-100Zi, a 100-GHz oscilloscope for development of advanced next-generation communication systems. With this introduction, Teledyne LeCroy says it is aggressively pushing real-time bandwidth and sample rate boundaries to achieve 100 GHz and 240 GS/s.

The 100-GHz technology was first publicly demonstrated in July 2013, and has since been featured at the 2014 DesignCon, OFC, and ECOC exhibitions. This technology, now incorporated into the LabMaster 10-100Zi 100-GHz oscilloscope, is the key to analyzing and understanding the fastest phenomena found in R&D labs where engineers and scientists are working on next-generation communication systems, high-bandwidth electrical components, and fundamental scientific research, the company asserts.

Teledyne LeCroy points out that the LabMaster 10-100Zi was recently used by Alcatel-Lucent (Euronext Paris and NYSE: ALU) to demonstrate the highest-bandwidth coherent optical receiver capable of detecting a 160-GBaud QPSK signal.

"As we research new ways to expand the amount of data that future optical communications networks will be expected to carry, we demonstrated a record 160-GBaud QPSK system prototype. The 100-GHz bandwidth and 240-GS/s sampling rate were key in building this system," said Dr. Peter Winzer of Bell Labs, the industrial research arm of Alcatel-Lucent. "We are excited to see that Teledyne LeCroy has pushed oscilloscope technology to where the oscilloscope's bandwidth is no longer the limiting factor in our research; it currently exceeds the bandwidth of the transmitter and optical-to-electrical converter in the receiver."

For more information on test equipment and suppliers, visit the Lightwave Buyer’s Guide.