The IEEE 802.3bs standard not only ushers in a pair of new Ethernet transmission rates – 200 Gigabit Ethernet and 400 Gigabit Ethernet – but a new test process that optical technology engineers must learn. Transmission Dispersion and Eye Closure Quaternary (TDECQ) is the most salient part of this new procedure, which became necessary when the IEEE Task Force members replaced NRZ modulation with higher-order PAM4 as the foundation for these new transmission rates in single-mode fiber networks. 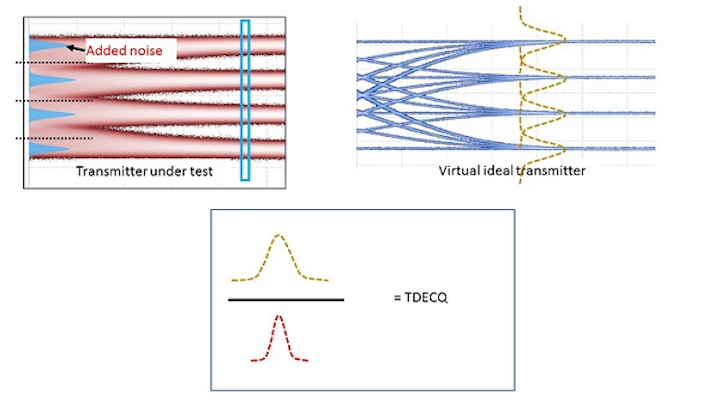 The IEEE 802.3bs standard not only ushers in a pair of new Ethernet transmission rates – 200 Gigabit Ethernet and 400 Gigabit Ethernet – but a new test process that optical technology engineers must learn. Transmission Dispersion and Eye Closure Quaternary (TDECQ) is the most salient part of this new procedure, which became necessary when the IEEE Task Force members replaced NRZ modulation with higher-order PAM4 as the foundation for these new transmission rates in single-mode fiber networks.

PAM4 is a form of pulse amplitude modulation that encodes information on four levels (hence, PAM4). The format enables two bits per symbol, thus doubling the amount of information that on/off keying NRZ can support for the same signaling rate. This improvement in transmission efficiency made PAM4 a natural alternative when it was apparent NRZ couldn't support the 400 Gigabit Ethernet Task Force's transmission rate and reach goals for single-mode fiber applications.

However, use of the new modulation format meant that the standards makers also had to consider new test procedures. Consider the four main test parameters for an NRZ transmission:

The principles of PAM4 modulation necessitated changes in how all four parameters are defined and tested. For example, accurate extinction ratio and OMA measurements aren't conducted on the aggregate PAM4 diagram, but on long runs of the 0 and 3 levels. To spell out this difference in detail, the IEEE created Outer OMA and Outer Extinction Ratio. Technicians will measure these parameters on specific bit sequences, which means their oscilloscopes must be pattern locked. Long signal patters such as PRBS31 also are no longer in play; PRBSQ13 and Short Stress Pattern Random Quaternary (SSPRQ) will be used most commonly, say sources.

The Task Force members also decided to do away with eye-mask measurement entirely. The eye-mask diagrams were expected to be messy enough to require receiver equalization, which made such tests less valuable and less likely to accurately predict system performance. Transmitter dispersion measurement would be a better performance predictor, the Task Force members concluded.

But instead of TDP, the Task Force turned to TDEC (without the "Q"), a measurement technique codified with IEEE 802.3bm, as a better way to measure transmitter dispersion in multimode fiber for 100 Gigabit Ethernet applications. TDEC takes advantage of the fact that forward error correction enables link BER levels to be relatively high and still achieve very low system-level BERs. As a result, test procedures in a FEC-enabled environment don't have to be as stringent – or, potentially, as expensive to perform. TDECQ is a variant of TDEC optimized for PAM4.

Taking the measure of TDECQ

Whereas TDP required the comparison of a transmitter under test to a golden transmitter, TDECQ compares the symbol error ratio (SER) of the subject transmitter to a virtual ideal transmitter. Also, since real systems will have equalizing receivers, the TDECQ test system also uses a virtual equalizer to open up the transmitted eye.

In practice, the technician seeks to statistically determine the SER of the transmitter under test directly on its signal as captured by an oscilloscope. Rather than the common practice of attenuating the signal to create errors, TDECQ calls for noise to be added mathematically to the signal. The noise level is increased until the target SER, which is 2e-4, is reached.

As the IEEE 802.3bs standard took some time to come together (thanks in part to the addition of the single-mode 200 Gigabit Ethernet work), the way TDECQ resources and procedures are configured have evolved during the same timeframe. For example, whereas it was at one time thought best to optimize the virtual equalizer to minimize the spread of the eye levels and therefore create as open an eye as possible, the final specifications optimize the virtual equalizer to directly minimize the TDECQ penalty. The virtual equalizer itself has evolved from being T/2 spaced to T spaced. From a measurement perspective, technicians are allowed to optimize the measurement time position to enable the minimum TDECQ penalty, rather than taking the measurement at two time slices about the eye center. And Nyquist oscilloscope bandwidth (50% of baud rate) has been specified for the measurements.

With work on 400 and 200 Gigabit Ethernet transmission underway well before the ratification of IEEE 802.3bs, test instrument vendors have offered TDECQ options for some time. With the standard now ratified, design engineers and others working with PAM4 for the next generation of Ethernet transmission should find instruments on the market now that meet the final TDECQ procedure requirements. But be aware that TDECQ will also be used in subsequent standards that employ PAM4 optical transmitters, and the engineers continue to look for ways to refine the TDECQ concept.

For more information on test equipment and suppliers, visit the Lightwave Buyer's Guide.