The Bright Future of TWDM-PON and Wavelength Unbundling

Today, network providers have several options when it comes to investing in next-generation PON technology. However, in the race to more effectively monetize network investments, address growing needs for symmetrical bandwidth, and better serve future evolving end-user demands, network providers are increasingly turning to time and wavelength division multiplexed PON (TWDM-PON). Why? For many, it starts with the flexibility the technology provides. 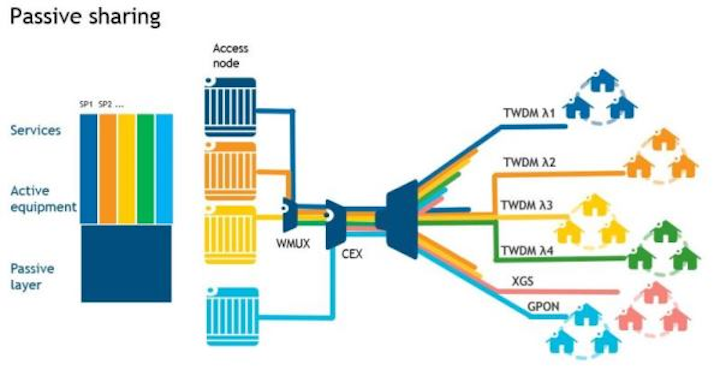 Today, network providers have several options when it comes to investing in next-generation PON technology. However, in the race to more effectively monetize network investments, address growing needs for symmetrical bandwidth, and better serve future evolving end-user demands, network providers are increasingly turning to time and wavelength division multiplexed PON (TWDM-PON). Why? For many, it starts with the flexibility the technology provides.

Unlike GPON or XG-PON1, TWDM-PON offers up to four wavelength pairs (eight in the future) that can each be configured at different bitrates (10G/10G, 10G/2.5G, 2.5G/2.5G) to best address the specific requirements of residential, business, or backhaul services. Providing up to 10-Gbps symmetrical speeds on each wavelength, TWDM-PON enables operators to easily differentiate existing residential service offerings and efficiently capture new revenue opportunities at the enterprise level. The technology also facilitates a multi-service access approach that enables the convergence of services onto a single architecture, which helps to further accelerate the monetization of fiber networks. With the flexibility to add wavelengths one by one, service providers can effectively scale their fiber networks and seamlessly evolve network capacity from 10 Gbps to 40 Gbps, and beyond, as demand grows in the future.

Julie Kunstler, principal analyst at Ovum, has commented on this trend, saying:

"TWDM-PON's ability to support different types of subscribers or applications through the use of different wavelengths, and different bit rates on those wavelengths, provides a significant advantage over other next-gen PON technology. The technology's ability to simultaneously support more subscribers, more applications, and even network sharing leads to faster network monetization, which is important given the costs associated with building an FTTx network."

In addition to some of these well-known benefits, TWDM-PON also provides a unique capability -- wavelength unbundling -- that is changing the economics of fiber networks. This feature can help network providers secure additional revenue from wholesale opportunities, reduce business risk through network infrastructure co-investment, accelerate fiber deployments, and reduce overall costs.

How? In considering TWDM unbundling scenarios, it helps to look at the network as consisting of three separate layers:

The actual unbundling in TWDM-PON networks can be done in three ways:

The scenario a network provider ultimately implements can be influenced by the infrastructure, technology available in the network, the organizations involved, and each organizations' motivations. However, the flexibility available through TWDM-PON provides more options from which operators can choose to best meet their specific business-model needs.

TWDM makes it possible to have up to four service providers (each with their own wavelength) on a single network, which is sufficient for most markets. Because TWDM can co-exist with other PON technologies, it also leaves plenty of room for operators to grow and add wavelengths as needed. As a result, today operators are able to run a GPON network, add TWDM on the same network, and then source out the wavelengths to service providers or keep them for their own future needs and operational use.

Different Sharing Models and Their Benefits

TWDM-PON shows great promise for deployment across both new "greenfield" networks and existing "brownfield" fiber networks with an objective for further growth. Operators increasingly consider TWDM-PON the technology of choice for both applications.

In both scenarios, operators can generate new revenue streams, create more capacity, and have more flexibility in offering wholesale services. Here's how:

Wavelength mobility is another unique characteristic of TWDM-PON technology that can benefit both multi- and mono-operator environments.

For instance, if an end-user wanted to switch service providers today, the task would often require a truck-roll and replacing the user equipment (ONT). With tunable TWDM-PON, an operator can simply change an end-user's wavelength directly from the central office – assuming there is interoperability between the access node and the ONUs. In the active sharing scenario, this is not an issue because one organization (the wholesale provider) controls all the active elements. Therefore, the assignment of wavelengths does not require complex, multi-vendor inter-node synchronization mechanisms.

However, in a passive sharing model, where each service provider has its own access node, there is a need for communication on a higher level to ensure synchronization between all access nodes. Currently, a standard protocol for this communication is under discussion within the Broadband Forum; it would prevent unauthorized switching of wavelengths and would ensure transparency for both end-users and service providers. These standards-based applications are expected to be ready within the 2018-19 timeframe.

TWDM-PON Drives Demand in 2016 and Beyond

With its promise of enhanced flexibility, more capacity, and new potential revenue streams, TWDM-PON is capturing the attention of operators everywhere. In early 2015, for example, several large operators and utility companies – including Vodafone in Spain and Energia in Japan – announced trials around the technology. Additionally, EPB in Chattanooga, TN, announced the first community-wide deployment of TWDM-PON as part of a growing effort to bring 10-Gbps services to all residential and business customers in the area.

As demands and requirements continue to evolve, TWDM-PON affords operators a new way to future proof their network, increase revenues, and accelerate the monetization of their network investments.

leads Fixed Network Fiber Marketing at Nokia. She has more than 20 years of experience in telecom and is a board member of the Fiber to the Home Council Europe.