What’s the matter, bunky? Feeling down that Ethernet optical transceivers sales showed their first year-on-year revenue declines since 2009? LightCounting says you should cheer up -- and has eight reasons why. 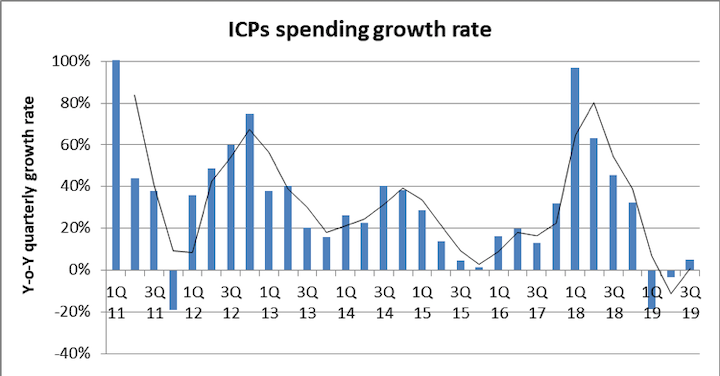 ICP spending has taken a nose dive over the last several quarters -- but picked up in Q3, according to LightCounting.
LightCounting

What’s the matter, bunky? Feeling down that Ethernet optical transceivers sales showed their first year-on-year revenue declines since 2009 (see “Ethernet transceiver sales to decline 18% in 2019: LightCounting”)? Concerned that data center spending hasn’t looked this soft in years? Worried that service providers are too focused on 5G to spend much on optical networks? Well, LightCounting is here to turn that frown upside down with eight reasons why component suppliers should feel good about their prospects in 2020.

The market research firm indicates in the newly released edition of its Quarterly Market Update that several of the factors that led technology suppliers to take their lumps this year should resolve themselves by some point in 2020. In fact, some of the negative indicators have already begun a change in direction. So LightCounting says it has eight reasons why 2020 will be better for components suppliers than 2019:

For more information about optical modules and suppliers, visit the Lightwave Buyer’s Guide.