The new markets bring to 26 the number of locations where CityFibre plans to bring gigabit-capable fiber broadband networks as part of a £2.5 billion initiative. 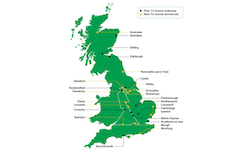 The second phase of roll-outs will extend CityFibre’s Gigabit City program by a further million homes. The company expects to pass more than 2 million homes across 26 towns and cities as of this second phase.
CityFibre

Once completed, the FTTP roll-out to the 26 markets will bring CityFibre’s network within reach of more than 2 million homes. The company plans to pass at least 5 million homes when its full plans have been enacted.

The new cities include:

In addition to providing direct gigabit fiber broadband connections, CityFibre says the new infrastructure also will support 5G small cell densification as well as smart city initiatives. The company estimates the financial benefits of the FTTP infrastructure could exceed £16.3 billion ($20.34 billion) and create more than 115,000 indirect jobs. More than 3,250 construction jobs will be created via the 26-city deployment, CityFibre estimates.

“CityFibre’s sole purpose is to deliver the future-proof digital infrastructure the UK deserves,” commented company CEO Greg Mesch. “With a new Prime Minister set to increase government’s ambitions for the pace of full fiber rollout, we are delighted to welcome another 14 towns and cities to our Gigabit City Club. These Gigabit Cities will not only gain new full fiber networks that will spark their digital transformation, but also unleash the benefits that only competitive infrastructure investment can bring.”